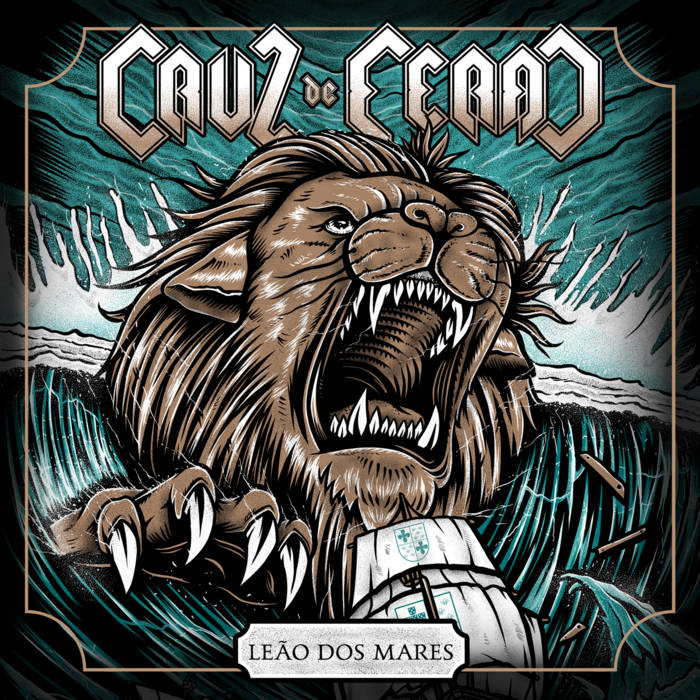 From the center of Portugal, with Portugal in the center. This is the matrix of the Cross. Epic heavy metal where the heroic national memory resonates. At the beginning of this year, the Cruz de Ferro undertake a new attack with the EP “Leão dos Mares”, five new compositions that promise not to defraud those who have been with them in the last decade and to join a good number of new fighters.

The band from Torres Novas, in the district of Santarém, again evokes important figures in the History of Portugal, some not always remembered for the remarkable achievements of centuries gone by. This is the case of Afonso de Albuquerque, the Leão dos Mares, who gives the name to this new campaign by the Ribatejo quartet. Governor of Portuguese India at the turn of the 15th century, the Great of Goa was so feared in the oceans as a diplomat of excellence. “Leão dos Mares” is anticipated by the theme that gives it its name in a video clip already available.

In this work recorded by producer Arlindo Cardoso and guitarist Ricardo Pombo at Southern Studios, reference is made to another character from the beginnings of Portuguese identity - Gonçalo Mendes da Maia, tutor of Afonso Henriques himself. Legend has it that the “Lidador” was already 90 years old when he defeated the Moors on a battlefront in Beja. The theme that closes this new and triumphant EP by Cruz de Ferro reveals the band in a rhythmic ride in the style of some Amon Amarth, exhausting the last turns of the disc to the sound of the Portuguese guitar.

In a Rastilho records edition, limited and exclusively on vinyl, there is room for new elements in the music of a group that continues, nevertheless, faithful to the tradition of pure and hard heavy metal, sung in Portuguese. “A Nau dos Loucos”, a theme that addresses the medieval custom of embarking the outcasts and madmen adrift, reveals a more insane aspect of the Cross, with blastbeats and pleading solos. "Council of War" attacks at a steady pace, with a relentless flame decreed by the sinister opening verses. The new album also includes the track “Velada de Armas”, inspired by the habit of praying to arms before a battle.

Cruz de Ferro started by releasing the EP “Guerreiros do Metal” in 2012 to, three years later, add all their combative power through the album “Morreremos de Pé”. In 2017, “Guerreiros do Metal” comes out in an enlarged version, with five new songs recorded with Arlindo Cardoso, where the drummer Bruno Guilherme debuts. Following are the EPs “Imortal” (2018) and “Soldado Unknown” (2020), a pandemic year in which the band was far from stopping, as it also put out the live tape “A Batalha de Torres Novas”, recorded first concert ever, on February 8, 2013, at Cine-Teatro Virgínia.

2021 is another year driven by the Iron Cross. Eight years after their debut record, these Metal Warriors are ready for a new battle and, as always, will come out winners, such is the arsenal they carry in yet another glorious EP! Sharp tunes, fearless riffs, overwhelming rhythms and the Portuguese language expressed with pride and vigor, in a job that deserves to be right in the heart of all Portuguese metalheads… and all over the world. The Cross is Back!